The aim of Here is to analyze the present-day world of adolescents from different social backgrounds. The fixture (a labyrinth of the analysis process of freedom as seen by adolescents) and the performance (on three levels, musical, literary, and visual) are part of the European project Liberty, coordinated in Romania by Claudia Maior and Andrada Cazan. Part of the program entitled Europa creativă/ Creative Europe, Liberty aims to explore the nature and senses of freedom in the 21st century. The participants were youngsters, with ages between 10 and 18 years old, selected based on an open call.

The metanarrative framework was offered by Jacopo, the Italian artist who has documented the construction process of the performance-show and who presented, on the outside of the labyrinth, the story of this experimental artistic construction.

The musical trainer was AFO, a rapper from Bucharest who aimed for something as honest and true as possible while writing verses with the ones who enrolled. He combined their texts with his music composed during the workshop. Reactions were quite diverse, from reluctance towards the genre to enthusiasm. Even though not all participants remained in the performance, all of them participated at the verse-writing. Motanu, who has already worked in our musical environment, worked on the songs within the performance, alongside AFO.

The trainers in dramatic writing were Kali Agnes and Ştefan Baghiu. Kali Agnes is a poet and playwright of Hungarian origin from Cluj-Napoca; Ştefan Baghiu is a writer and literary critic from Sibiu. Both worked with the participants at the workshop to help them choose the topics of their texts inspired from their own biographies and to make them as powerful as possible for public reading. Exercises consisted especially of choosing memories that, through their nature, may define the concept of freedom, from the way they dress, or their peers, to experiences related to family or school. The final set of texts show how significant freedom truly is to them, especially related to the norms of micro-groups, and how difficult it is for young people to confess their experiences.

Simona Dabija was the trainer for movement and modern dance. She tried to help them uncover the way in which the body is present on stage. The awareness of their own bodies was significant especially for understanding the way in which emotions can be conveyed as simple as possible.

The fine art trainer was Alexandru Cînean who worked on the concept of street art, impelling to find relevant symbols for freedom.

The personal branding trainer was Amalia Precup who spoke to the participants about appearing on social media and the way in which their on-line image may be as close as possible to their artistic desires. 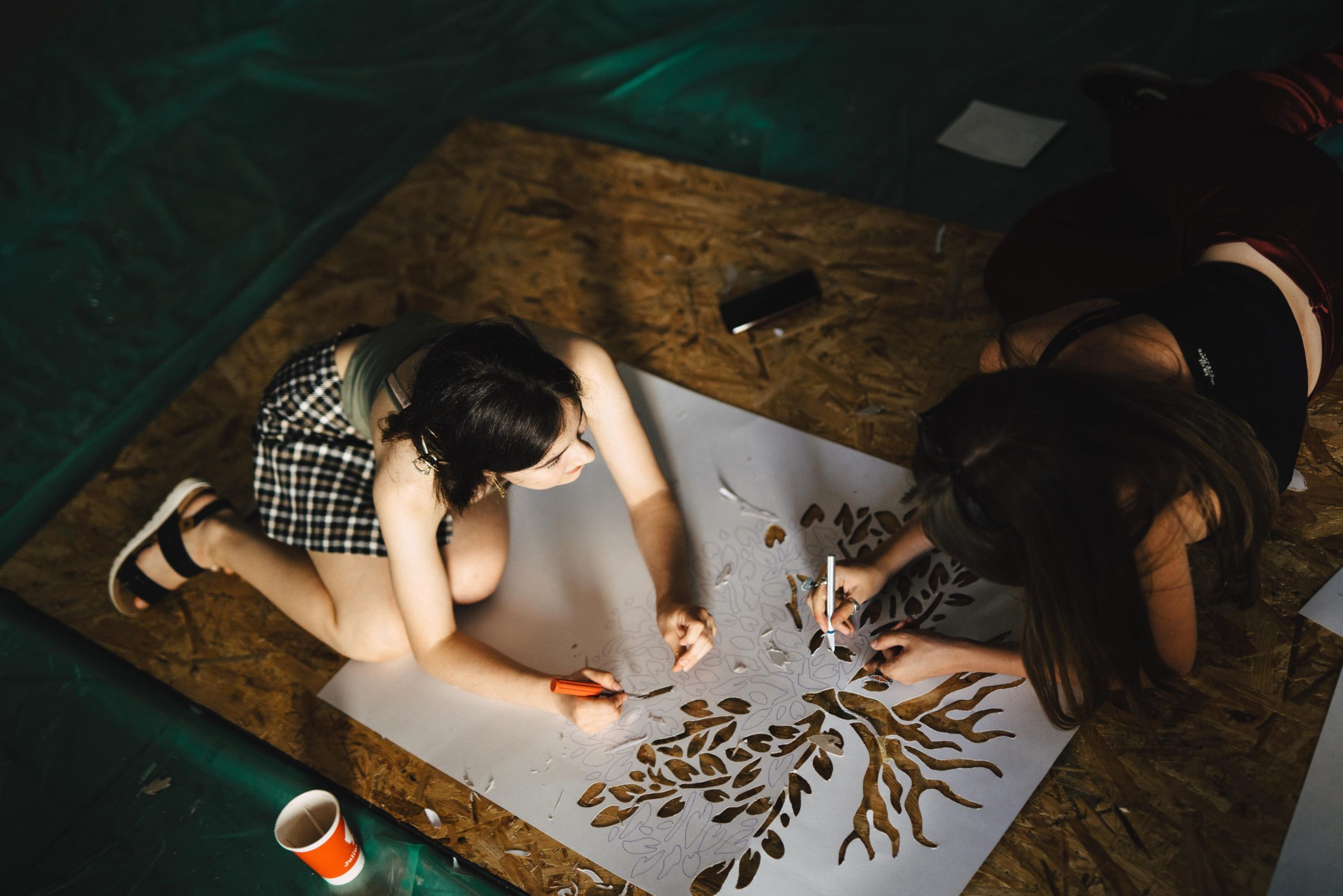 During the final presentation, coordinated by the director Bobi Pricop, the focus was on the stories and the plays of the participants, all gathered into a performance based on 3 main elements: the labyrinth – the place where the texts in their initial form, unaltered by the trainers, are presented inside, and on the outside, the story of the project; the reading moment/ spoken word – presents the texts worked on during the workshop, in the first part of the performance; the discussion collage – is represented by the most sincere moments of the participants, that have not been directed beforehand, an which revealed to us how well they can write/ create through unconfined discussion, beyond the standardized artistic convention. Between all these moments, Motanu’s songs and freestyle moments, which were guided by Afo, were introduced.

Thus, Aici/ Here, became especially a project on standardizing ideas in a contemporary world and on thought and expression patterns, which are more and more accentuated in a globalized world. We started from question proposals and we received standardized texts, as if they already knew what people expected to hear from them: acceptable proposals that were, more often than not, caught up in clichés, based on the example delivered mostly by social media. For this reason it was our decision to leave the texts unaltered at first, and, through our workshops, to try to obtain authentic testimonies on their experiences, beyond clichés and beyond the image that they tried to project initially. From standardized stories we arrived at borderline experiences that they can express only when connecting to others. From clichés about freedom we came to personal truths about the limits of freedom (money, the opinions of the others, family requirements, etc.)

Without being judgmental, we believe that today’s youth thinks and expresses itself artistically in certain patterns, and even though we are talking about one of the most unbound generations in recent history, there are still hesitations in expressing the real issues that they are confronted with. Most of the young participants arrived with an already established idea about theatre, dance or literature. They were quite convinced that what we understand through art is more or less a convention that allows them to express themselves, rather than a way of searching for their most dominant features through self-exploration. We started from the idea of freedom, trying to comprehend what it means to adolescents nowadays, which are the material and thought-related restrictions that form their world-view and which is their relation to what is happening in today’s society. 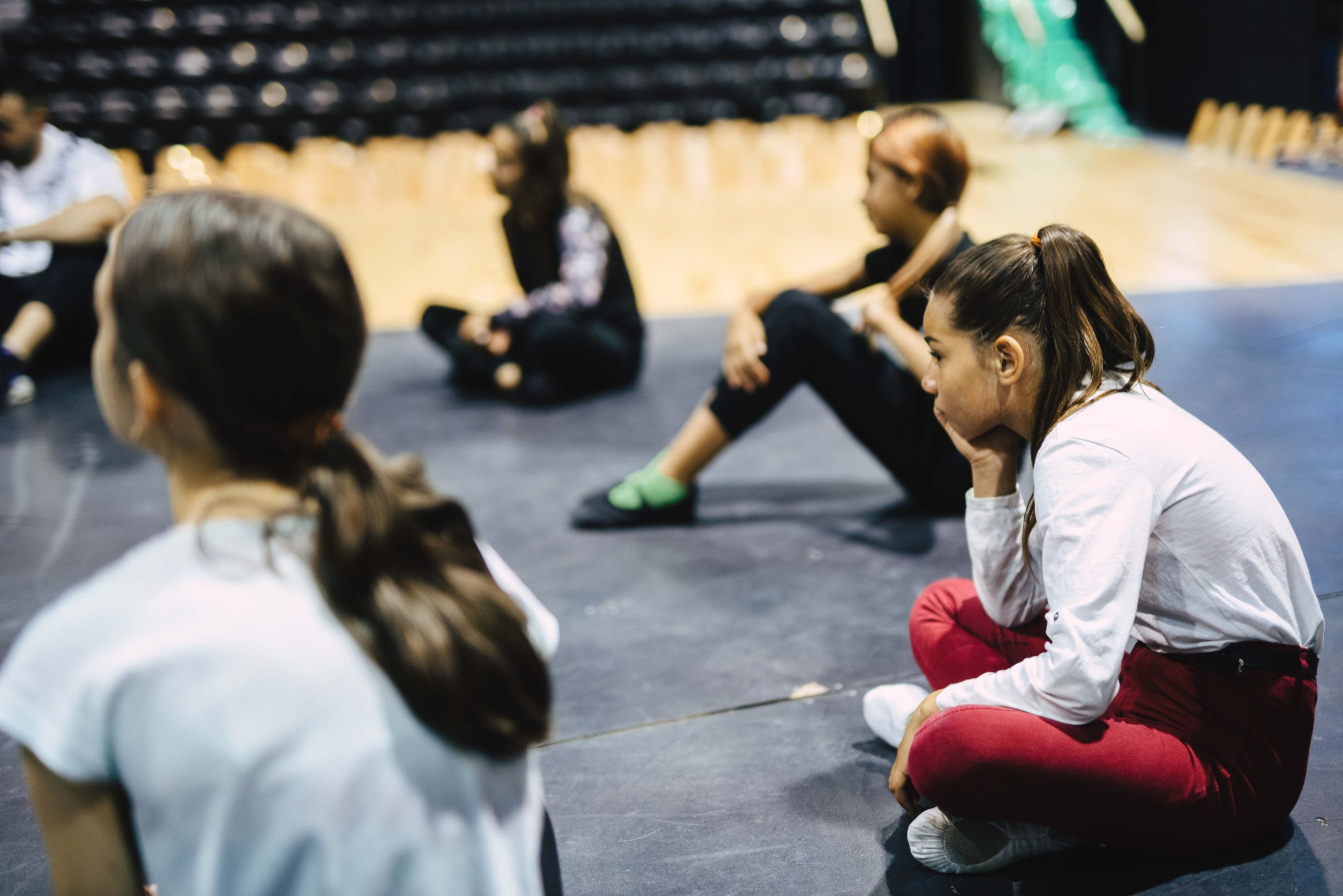 The overall purpose of the project was to explore three areas of what freedom might mean to young people today, through which the creative writing workshop coordinators helped the participants know and comprehend their stand towards: power (political, civic, social, intimate), their identity (or the image that they have of themselves, of what they want to become and how these are connected to freedom), and space (seen as the power to travel, to move and transformation through knowledge). Of course, the major interest was precisely the limits of these concepts for today’s youth and the way in which their discourse generates controversial situations/ hypotheses that go beyond the comfort zone. This is done precisely in order to achieve a correct analysis of the way in which we relate to the otherwise ambiguous concept of freedom, a concept that implies, in its very core, above all its limitations.

For the painting workshop, the proposal was street art, an art form where freedom to draw is tied to urban and pop culture. The trainer focused on symbols of freedom starting out from the confrontation of power in order to obtain basic rights. For the drama writing workshop, the trainers started out from a set of questions to reach their position regarding the concept of power. What was particularly interesting was the manner in which many of them saw themselves as leaders or as group managers, understanding power as a means of coordinating people.

The drama writing workshop focused primarily on narratives of travel (internal migration, parents commuting, journeys and emigration) in order to define the concept of freedom in relation to space, to freedom of movement, and, inversely, to the contextual limits of this space: poverty, the impossibility of traveling, the impossibility of leaving a certain space.

We tried to see how the freedom of self-representation, of dressing, of manifesting oneself, clashes with the active norms within society, family, one’s group of friends. 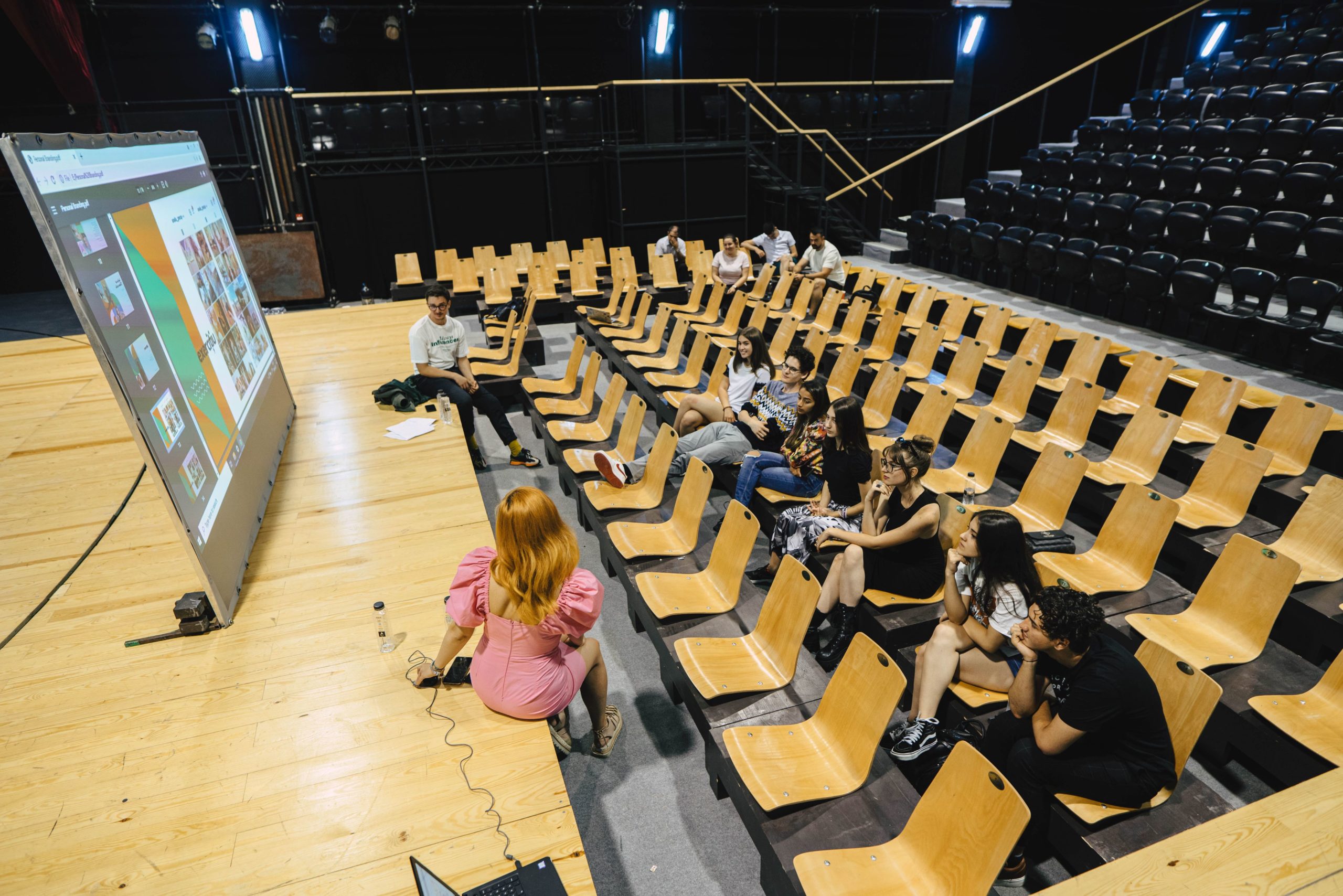 During a time of significant changes for Europe and the EU, who are confronted with a substantial population migration and simultaneously with the problem of refugees who reach Europe, when the cohesion of the community is challenged by terrorist threats and the implications of BREXIT (as well as other possible structural changes in the EU) – our partnership, based on previous collaborations between European cultural institutions, focuses on youngsters’ views and on the positive impact of creative integration through arts and culture, thus contributing to the creation of a new sense of identity and place (both on a local and on a European level).

As part of this partnership, we wish to significantly develop and better the process of artistic collaboration initiated during previous projects financed through the Creative Europe Programme, but this time the focus is on young artists, under the age of 30. 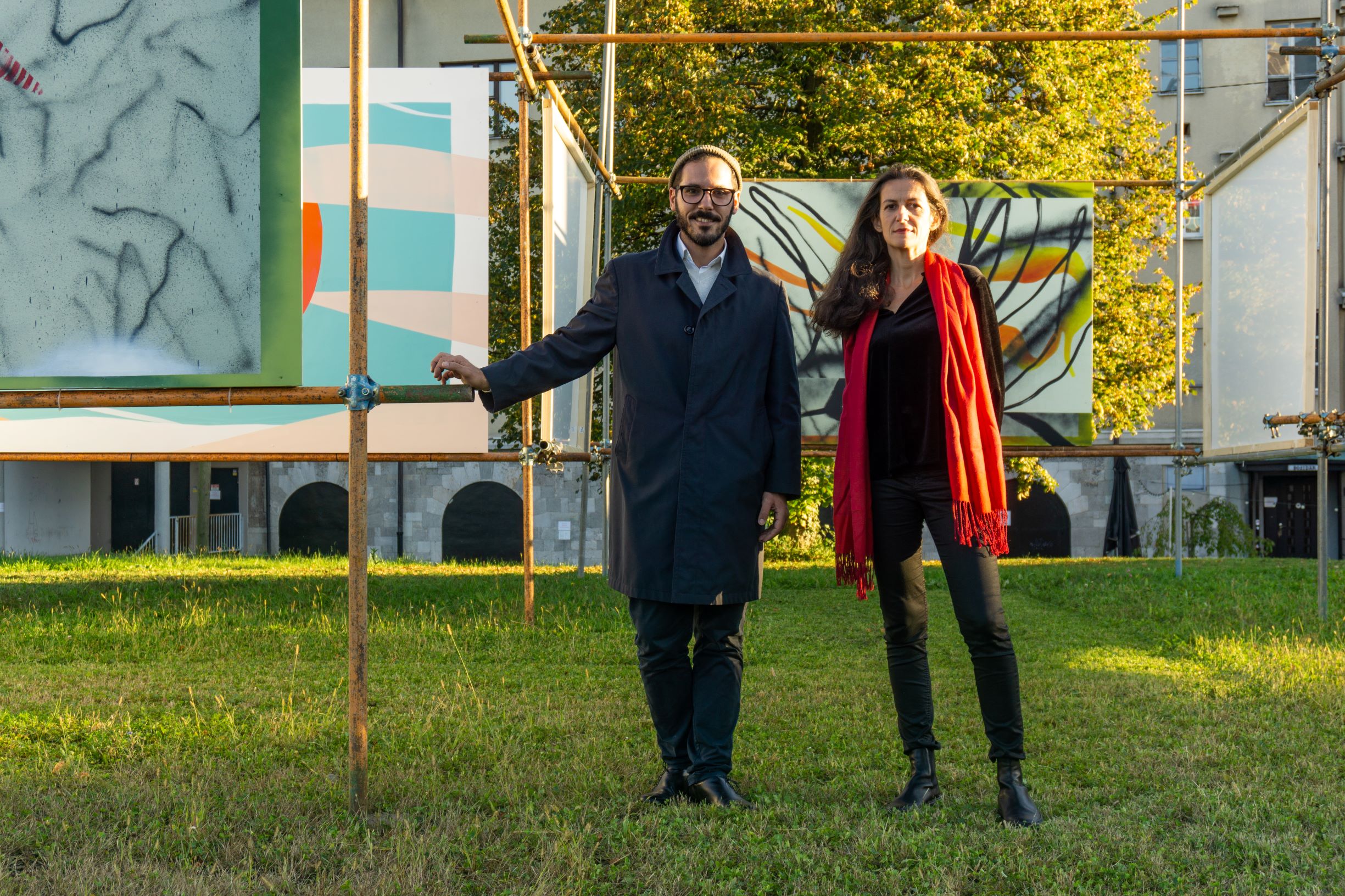 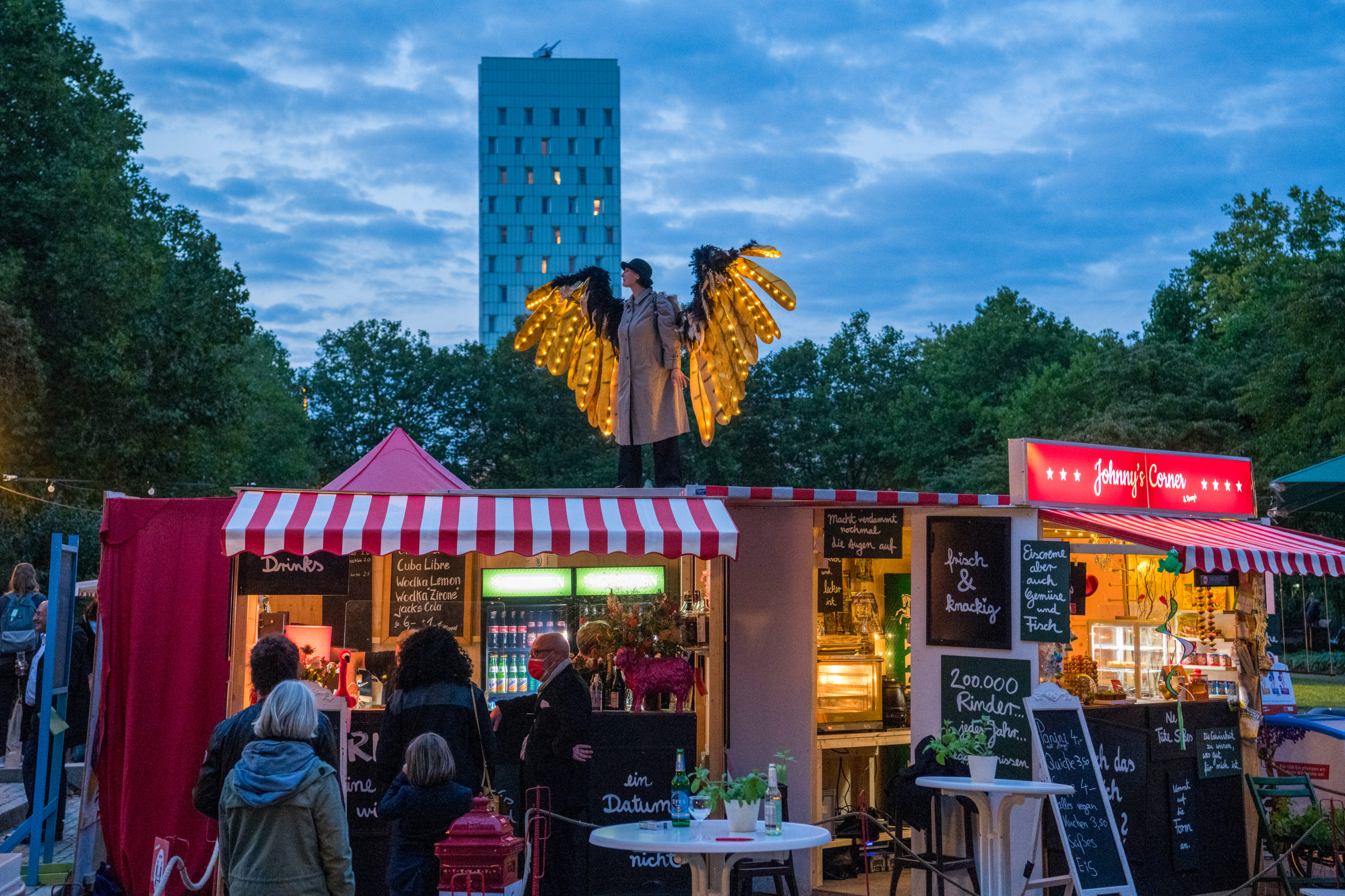